Your cart
Nowadays, with the popularity of the video era, more and more people set up their Youtube studios. Softboxes are used by more and more people and are no longer just the privilege of some professional photographers. Whether you are a videographer, Youtuber, or photographer, the softbox is one of the most useful lighting accessories. As we all know good lighting will make your video lever up. And the softbox just helps us with the better light solution.

Why we need a softbox?

A softbox is an enclosure around a bulb comprising reflective side and back walls and a diffusing material at the front of the light. From the words of Wiki, you can see the softbox is light auxiliary gear. Indeed, you cannot use a softbox along with a continuous video light or flash video light. For a serious videographer or photographer, a light can do a great job, but the work comes out great with a softbox to smooth your light.

Softboxes have several different types: octabox, squarebox, stripbox, latern softbox, parabolic softbox, etc., they are all named by the shape. The most classic style is octabox, with a regular square shape, but according to the market feedback, the parabolic softbox seems to have become the new favorite of some videographers with its beautiful lines and easy setup way. So today we will talk about the Parabolic softbox.

First up on my list is the Aputure light dome II 35'' softbox. It's compatible with Bowen-S mount systems light and most of Aputure light. As a global designer and manufacturer of cinema lighting fixtures, light-shaping accessories,the softbox from Aputure is also of high quality and good performance. And If you are a fan of Aputure and use their COB line of LED lights, you can buy this softbox without hesitation.

The Light Dome II is designed to fit with all fixtures from the Light Storm COB family. It is also compatible with a wide variety of Bowens mount lighting systems, the most common mounts used in the world of photography. It's said it could create an extremely voluminous soft wrap around light.

Here is the review from Curtis Judd, in his video, he gives his professional opinion of this softbox. There are his reasons for you to take this softbox: The Light Dome II produces especially soft, beautiful light. Included accessories-grid, gel holder, multiple diffusion fronts-which which are rarely included with some pro-level softboxes. If you shoot with a Bowens mount light, these are highly recommended. The Cons he mentioned: Gel holder in Mini II is a little crowded.

The sales of Neewer on Amazon are very good, probably because of its affordable price and good performance. If you are a beginner of photographer or videographer and don't have much more budget for the light and softbox, you can choose their light kit. 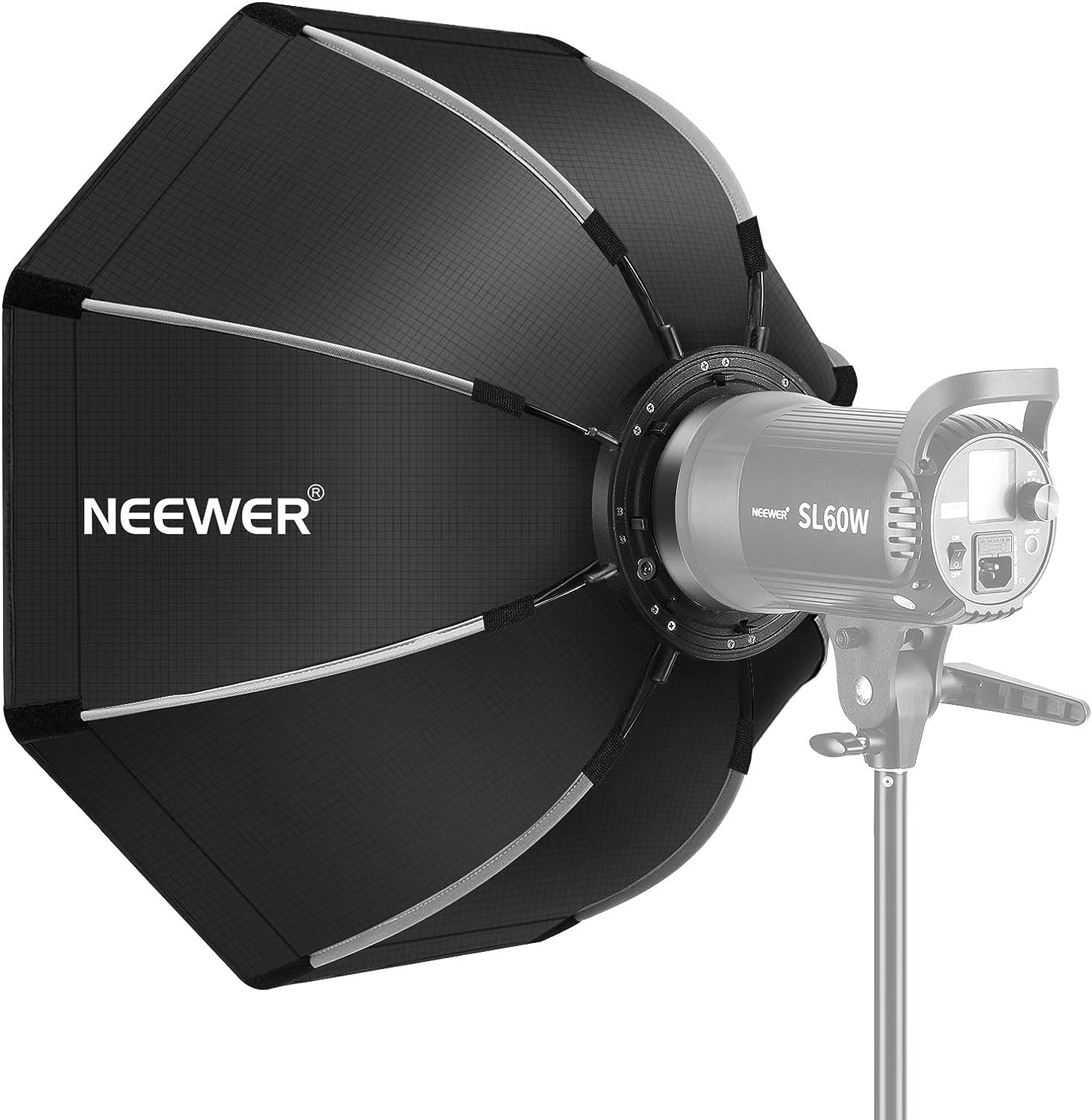 Here is the video from Sam Holland, which you can see the diffiences between Aputure Light Dome II and Neewer softbox. In the video, you will find that the quality of Aputure products is indeed better than that of neewer, but the price is almost three times that of neewer, if you don't want to spend too much on studio equipment, and only use it as a studio light and don’t carry it often, Neewer may be a good choice. 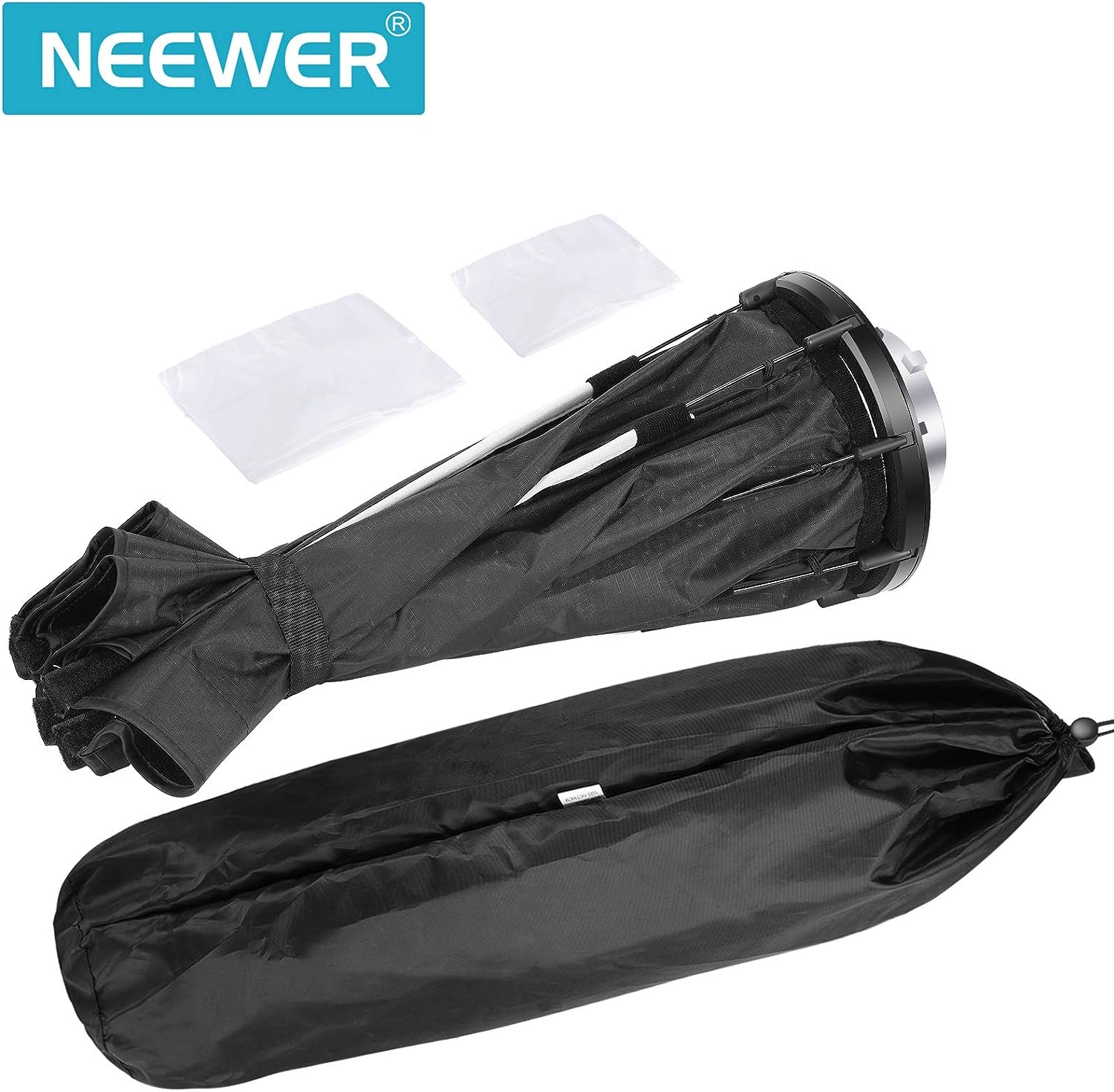 Laofas is a new player in the Market of lighting accessories, the best product they sell is laofas parabolic softbox and laofas sophomore rgb light. Their initial softbox product is laofas deep parabolic softbox (A), after several research and improvements, an upgraded version came out: LAOFAS Deep Softbox (B). If you want to buy their parabolic softbox, it's better to choose a B version. 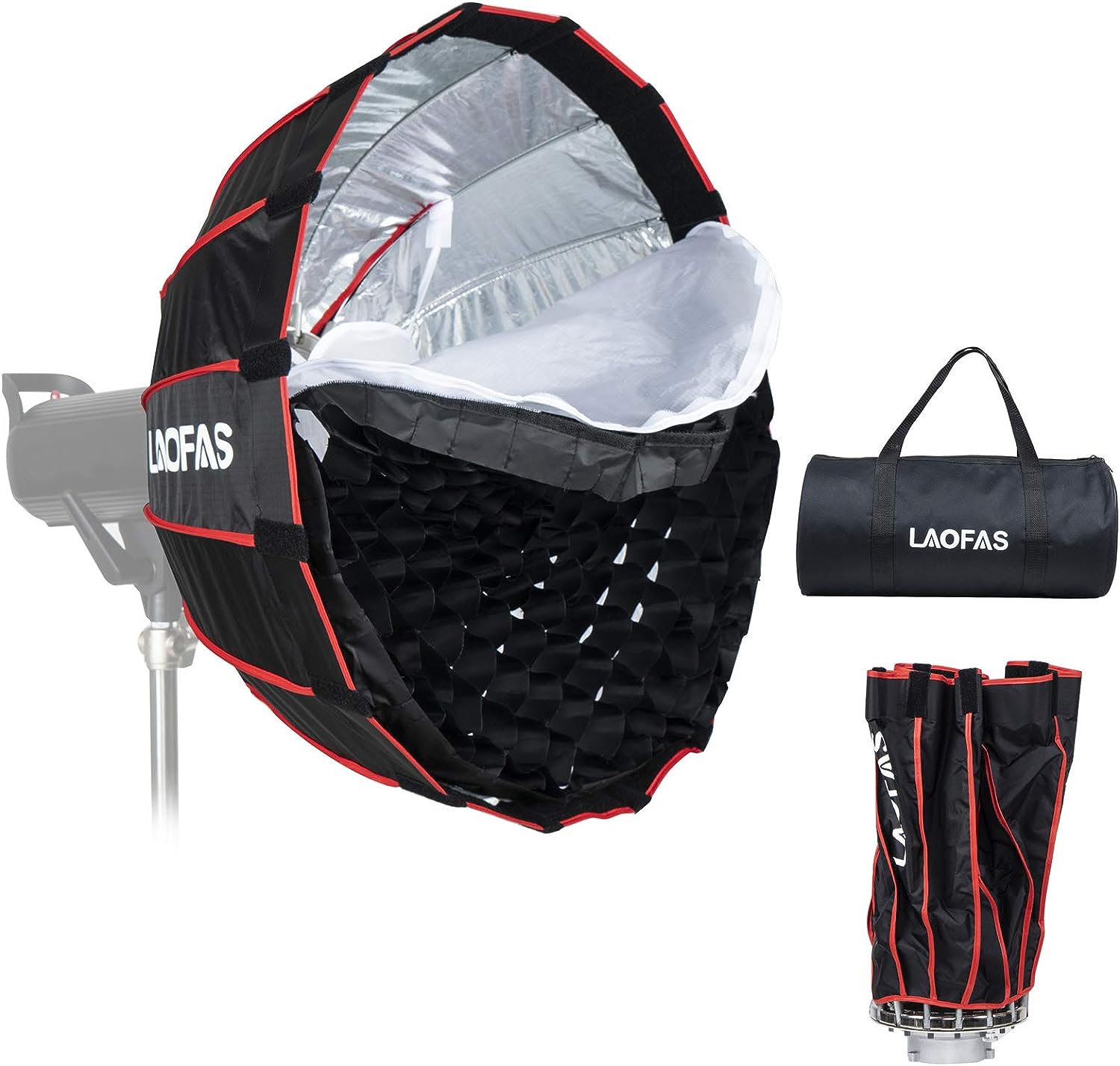 It's called by some YouTubers as the best alternative to Aputure Light Dome softbox. Both the quality and performance of the product are very close to Aputure, and in some aspects, it is even better, you can see the difference from Sam Holland's video. More importantly, the price is much cheaper than Aputure. If you are looking forward to a budget alternative for Aputure Light Dome II, you can check this softbox.

Glow EZ Lock softbox is also a solid product for most people and for not much money. The color of this softbox is black and yellow, among the softboxes I recommend, it seems to be the most eye-catching. The Brand is from Canada, you can buy from Adorama on Amazon, but it seems not to ship to UK or EU. 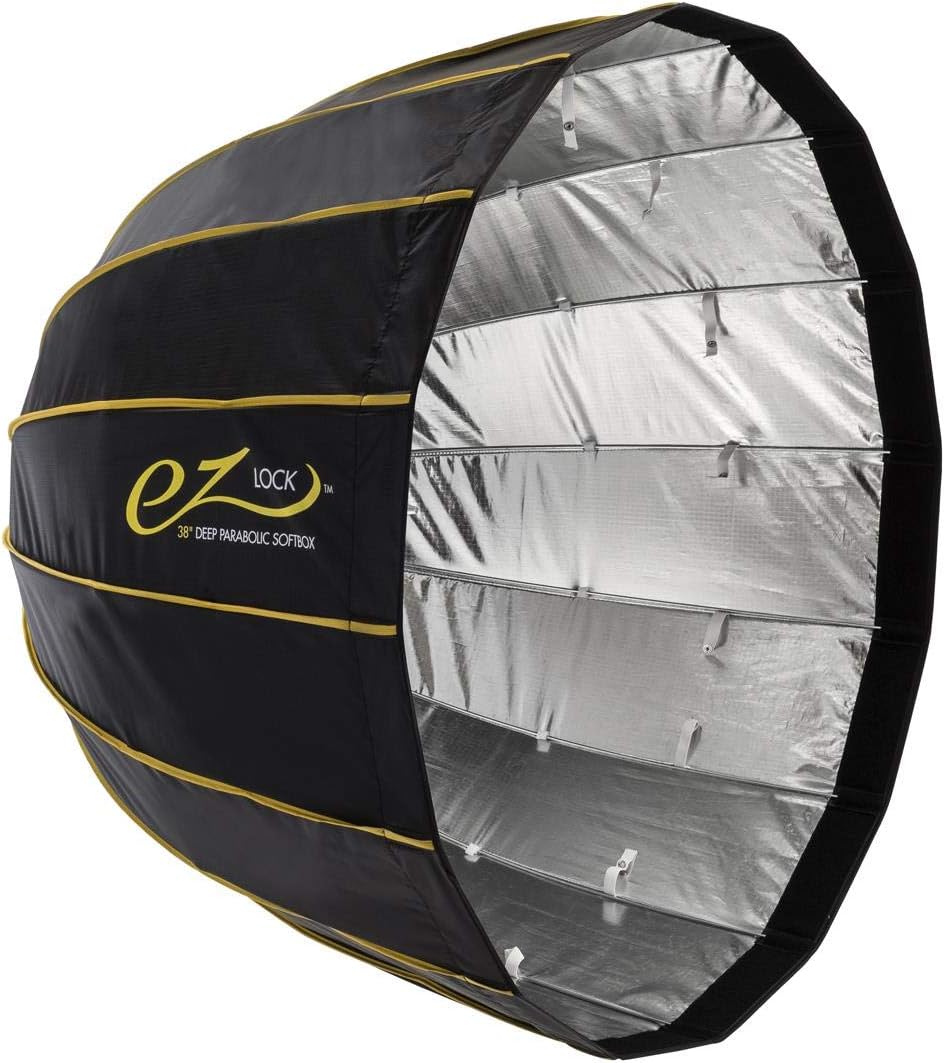 In the review video by Wes Perry, he gives this softbox a high score. "It's well-built quality and pretty solid. It builds a beauty hot ring just like Laofas system. so this softbox much like the laofas softbox, produces a bit of a beauty dish style hot ring around the edge and I prefer that. " But in the video, the setup seems a bit of difficult, "it's not that hard but it's not that easy either".

As one of the professional photography product manufacturers, Godox has always attracted most photographers with its high-quality and low prices products. If you have a Godox light system, you can pick their parabolic softbox as a choice. The rods and Bowen mount are pretty good quality, the light is soft after using this softbox. 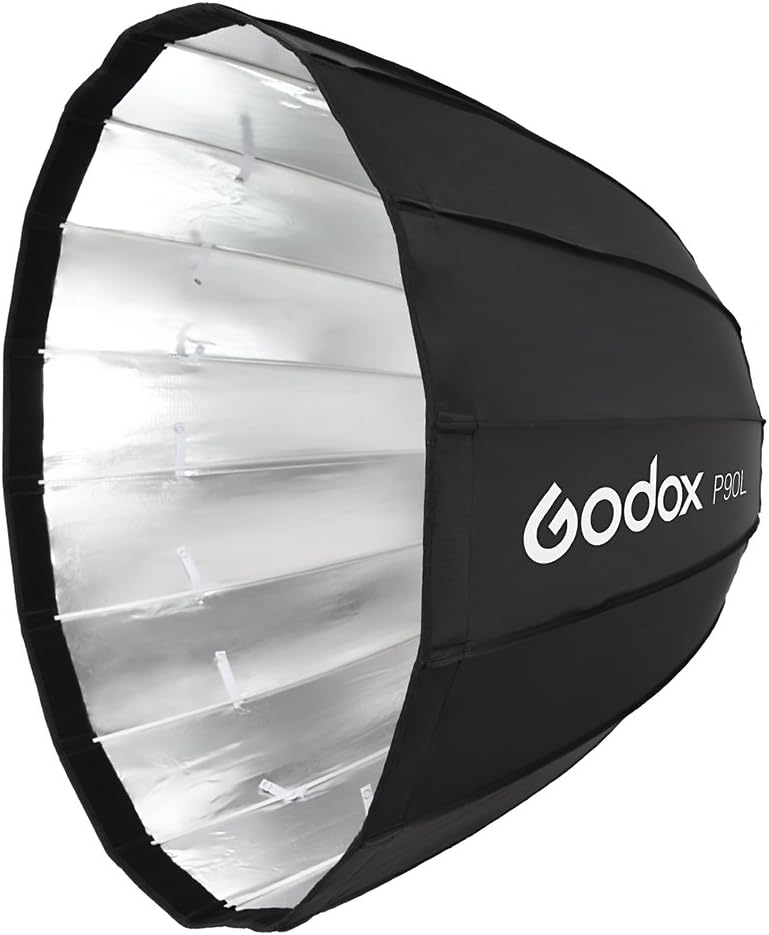 However this softbox is not very easy to set up and if you'd like to take it with you for outdoor photography, you may have to set it up every time. So if you are a studio photographer or videographer, you can add this softbox to your list, but if you want to carry it outdoor, I will not recommend you this one. This softbox may be the most difficult to install among the several products I recommend.

What softbox is best for you?

If you’re not going to spend too much on equipment, and want to focus more on your work itself, the Neewer is a good choice. You can choose to buy their light kit, it will save you some money.

If you use the Aputure system and want to get better illumination, then go directly to Aputure Light Dome II. If you want to "cost-effective" softbox, the Glow and Laofas is both your choice.

Any of these qualify above are high-quality softboxes for continuous light at a reasonable price. For YouTubers and Vloggers, one softbox for your setups in front of the camera could be adequate.

So if your goal is a good parabolic softbox, what's your choice? Comment below to let us know.